In 2023, the global semiconductor market will decline by 14% year on year, the largest drop since 2001 - Branchentrends | Heisener Electronics

In 2023, the global semiconductor market will decline by 14% year on year, the largest drop since 2001

From the perspective of ranking, although the storage market has declined, Samsung still successfully maintained its first position, ahead of Intel, which ranked second. Qualcomm rose to third place, Broadcom ranked fourth, and SK Hynix ranked fifth. 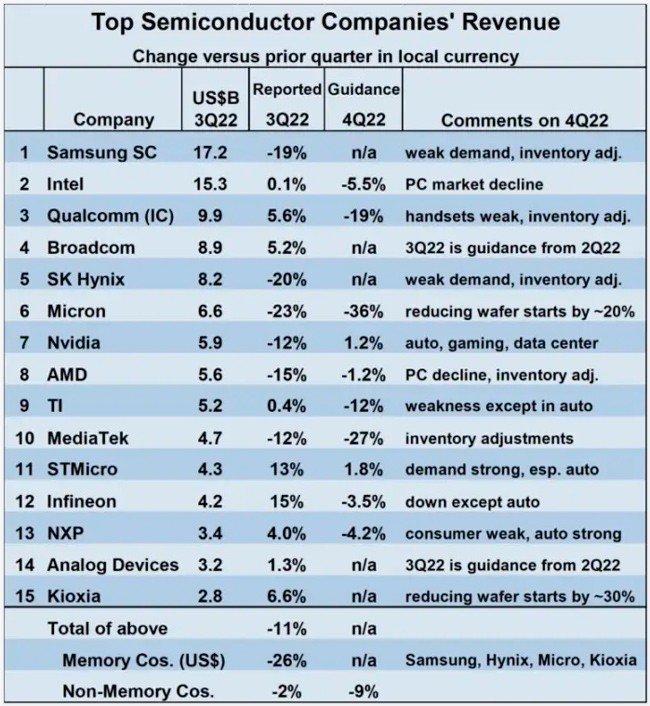 The revenue outlook of the top ten semiconductor manufacturers in the fourth quarter of 2022 is generally gloomy, especially for storage manufacturers.

Among non memory chip manufacturers, Qualcomm, Texas Instruments and MediaTek all expect a double-digit 100% decline in revenue in the fourth quarter of 2022. Most enterprises attribute weak overall demand and customer inventory adjustment to the bleak market demand outlook. It seems that only the automobile market is the only healthy part.

Texas Instruments, STC, Infineon and NXP all said that the growth of the automobile industry largely or partially offset the decline of other industries.

Of the ten companies providing guidance for the fourth quarter of 2022, only NVIDIA (+1.2%) and STF Semiconductor (+1.8%) are expected to increase revenue.

The weighted average revenue change of the nine non memory chip companies providing guidance is 9% lower in the fourth quarter of 2022 than in the third quarter of 2022. 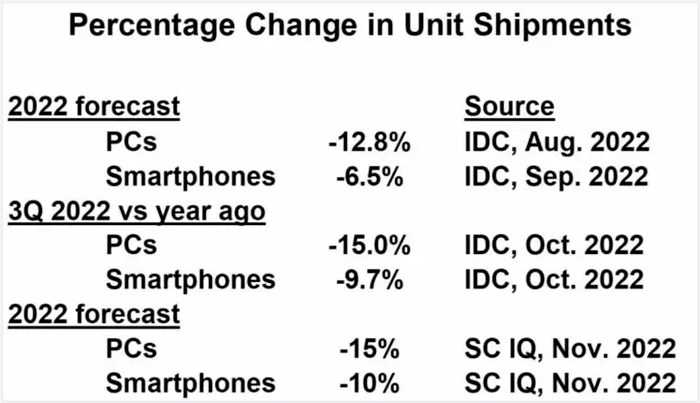 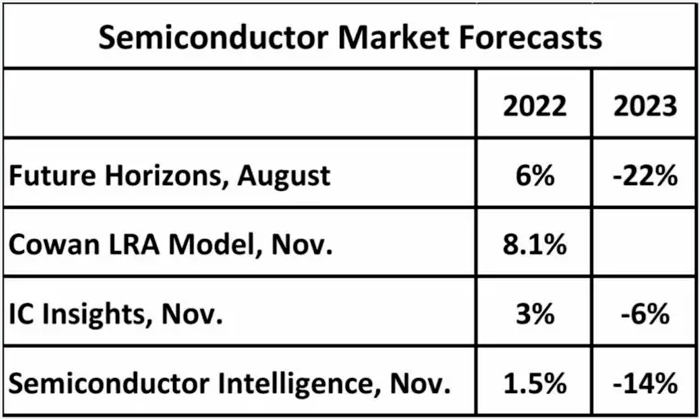 The WSTS committee met last week to discuss its autumn forecast, which will be released in the next two weeks. It is interesting to see how much it has changed from WSTS's forecast of 13.9% growth in 2022 and 4.6% growth in 2023 updated in August.

However, Semiwiki's prediction of a year-on-year decline of 14% in the semiconductor market in 2023 is based on the following assumptions: inventory correction will be resolved in the next two to three quarters; PC and smart phones will return to the pre pandemic trend by the middle of 2023; There will be no global recession in 2022 or 2023. Semiwiki said that if any of the above assumptions are not realized, the semiconductor downturn may last until the whole quarter of 2023, leading to a year-on-year decline of more than 20% in the semiconductor market in 2023.